As a homeowner, I used to wonder why my vents had water around them frequently. I never found out the reason until I got into the HVAC business.
Turns out it’s usually caused by condensation forming on your ducts and leaking onto your ceiling.
Sounds pretty simple and painless but do not ignore this issue as it could produce mold after a while.

Why does this happen?

Try picturing a glass of water that you set down. After a few hours it’s covered in water droplets on the outside. That is called condensation.

The same thing can happen with your AC system and vents. Basically, when the cold air from your air conditioner mixes with the warm, moist air in your attic, condensation happens. And then it drips down onto your ceiling creating nasty water marks.

There are three main reasons why this typically happens:

Not enough insulation on the ducts themselves:

Having constant air running through you typically makes you cold. Surprise, the same applies to duct work! When cold air is constantly flowing through it and it is not insulated to its full potential, it will act like the glass of water and start to gather the water droplets and drip on your ceiling. 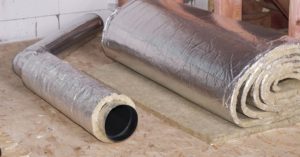 How to fix/avoid this?: If a homeowner isn’t sure exactly what  real insulated duct work might look like, call us today to show you or take a look at the picture I have to the right . This is an example of what your ductwork should look like.

If you take off your AC vent and look up, you’ll see sheet metal. That’s the boot. The boot is the connection between your ducts and the vent.

However, many homes have uninsulated boots. This is basically the same problem as uninsulated/poorly insulated ducts; the boot gets cold, causing water to condense on it and drip onto your ceiling.

How to fix/avoid this: A simple fix would be to just lay the insulation over them in the attic. Better to be safe than sorry, I’d insulate the boots anyway.

If the problem isn’t insulation on the ducts or boot, the next most likely problem is an air leak. Usually, the leak happens where the vent boot grasps to the duct. If not properly sealed, the cold air leaks out, meets up with the warm attic air and creates condensation.

The fix: If the vent in the attic is easily accessible, a homeowner can easily find the leak and seal it themselves. If they are unable to do so, our technicians here are skilled enough to crawl up there and find the issue and solve it!